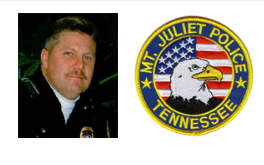 Sergeant Jerry Mundy and Deputy John Musice, of the Wilson County Sheriff’s Department, were struck and killed by a vehicle being pursued by officers on I-40.

The chase had originally gone through Marysville and Knoxville, but officers called off the pursuit and notified other agencies along the highway. When the vehicle entered Wilson County, officers began the pursuit again at speeds reaching 140 mph. The vehicle struck Deputy Musice and Sergeant Mundy as they attempted to lay down stop sticks near exit 226.

The two female occupants of the fleeing vehicle were injured in the incident and taken into custody at a local hospital.

Sergeant Mundy had been employed with the Mount Juliet Police Department for 15 years, and is survived by his wife, parents, four children, two sisters, and brother.